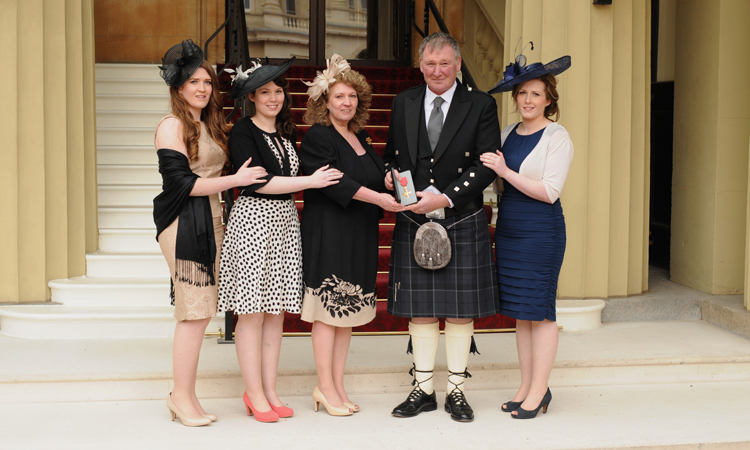 Andrew was born in 1962 in Orkney and has lived in the village of St. Margaret’s Hope all his life. He worked on the family farm, Smiddybanks, before getting some independence by starting his own business, Banks Sea Farms, harvesting salmon in the local waters. Andrew and Susan were married in Edinburgh, Susan’s home city, in May 1986 and went on to have four children. Andrew decided to close the salmon farm in 1997 so that he could concentrate on establishing Pentland Ferries. Since then he has been the Managing Director of the company and works between the office and on shore. In the 2014 New Year’s Honours List Andrew was awarded an Order of the British Empire by Her Majesty the Queen and attended his investiture at Buckingham Palace in March of that year where the Queen personally adorned him.

Susan was born in 1962 in Leith, Edinburgh and lived with her parents, brother and sister in Leith until she married Andrew in 1986 and moved to Orkney. Having four children, Susan certainly had her hands full but she still kept involved with Banks Sea Farms by looking after the finances. Since Pentland Ferries was established, Susan has taken the lead role in the company finances, working from an office in the family home. More recently she has also been carrying out Grandma duties looking after Sara, their first grandchild, a few days a week.

Kathryn, the eldest of Andrew and Susan’s children, was born in 1988 and lived in the family home in St. Margaret’s Hope until 2009 when she moved to Kirkwall. She has worked in the company since she was 13 starting as a part time Customer Services Assistant and once she turned 16 she worked on the ship in the summer as a Steward. After leaving school she worked full time as a Purser before moving to the office in 2009 to work as the Office Manager. She is currently the Designated Person Ashore and Company Security Officer. Kathryn lives with her husband Michael and they have one child together, Sara, who was born in 2015.

Laura, the second eldest daughter, was born in 1989 and moved to Edinburgh in 2007 to complete a Biological Science degree at Heriot Watt University. Like Kathryn, Laura also worked in the family business as a Customer Services Assistant from the age of 13, at weekends and in the summer. In 2011 Laura graduated with Honours and started working immediately at the Western General Hospital as a technician in one of their genetics department.

In 2015 Laura moved back to Orkney for ten months to cover Kathryn’s maternity leave from Pentland Ferries. She currently works in the National Creutzfeld-Jakob Disease Surveillance and Research Unit in Edinburgh. Laura lives with her partner Jamie and they welcomed their son, Eddy, into the world in July 2018.

David, Andrew and Susan’s only son, was born in 1992 and lived in the family home until he moved to Toab, Orkney in 2015 with his fiancée Louise. After he left school David worked on the company ships as a Deck Trainee. Having completed some work experience at a local bodyshop garage in school he was offered a full time job in March 2009. In 2013 he decided to leave his job at the garage to work for the family business again and now works full time with Andrew in St. Margaret’s Hope. Louise also works in the company as an Admin Assistant.

Jenni, the youngest of the family, was born in 1993 and has also worked in the business from a young age as Customer Services. After 6th year she attended Orkney College to do an HNC in Business before returning to work as an Admin Assistant at Pentland Ferries. Jenni got a part-time job at the Pickaquoy Centre as Customer Services before being offered a promotion to maternity cover at the Pickaquoy Centre as a Personal Assistant to the Management Team. In 2015 when her contract ended Jenni came to work back at Pentland Ferries as a General Manager. Jenni now lives in Stenness, Orkney with her husband Calvin who also works alongside Andrew and David in St Margaret’s Hope.